Malia is here this week with our Pinterest Feature – and this week it’s one of my favorite people ever!! Howdy Folks! Thanks for joining us for the Pinterest Party. I’m your hostess, Malia. Today’s featured pinner is the blogger behind…

It’s Vivienne Wagner! You gotta love a girl who describes herself as a “love child” of Erma Bombeck and MacGyver.

Miss Vivienne likes her Pinterest… girlfriend has 70 Boards and an IMPRESSIVE 1085 Pins! Let’s take a gander through some of these lovely boards: Vivienne’s Stuff to Try Board has 147 insPINrational ideas!

There’s 102 pins to CELEBRATE on this Party Stuff Board

This is a GREAT one: It’s a board titled “Dang That’s Clever” and there are 76 very clever projects to browse through!

Let’s take a little closeup lookie see at Vivienne’s Stuff To Try Board: So COOL! I’m crazy about these Dipped Votives, pinned by Vivienne via Nest of Posies. Now let’s hop over to Vivienne’s For the Home Board: LIGHT IT UP! What an amazing project… Modge Podge & Graphic Tissue Project pinned by Vivienne via Saved By Love Creations. BRILLIANT! Personalized Table pinned by Vivienne via How to Nest For Less Vivienne! Thank you so much for linking up to the party.
Be sure to grab a featured button: 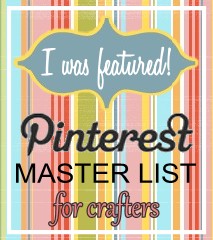 We would love to have you! And, who knows, maybe you will be our next feature!

This error message is only visible to WordPress admins

Make sure this account has posts available on instagram.com.